TBR Friday: Revenge of the Sequels

Happy Friday, folks! Today is a bit of a mea culpa. I’m pretty good at hyping up books I love, but I haven’t been doing a great job of hyping up sequels—I have so many “second in the series” books that I need to read! So today’s TBR is all about series follow-ups that I need to follow up on. If any of you want to come yell at me on Twitter about these books (nicely, please…I’m fragile), please do so. I’ve got 9 “Book 2” titles for you today—with handy links to my reviews of the first book in each series—so let’s check them out!

TUNNEL OF BONES by Victoria Schwab; cover by Baily Crawford
Sequel to City of Ghosts 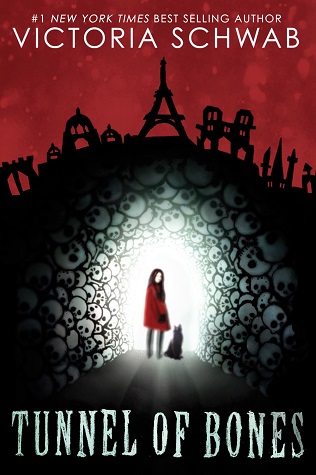 Fresh off their first adventure in Edinburgh, Cass and her ghostly best friend, Jacob, (plus her black cat, Grim) head to Paris for the Inspecters’ next ghost-hunting installment. There, they tour the creepy catacombs and learn about spooky stories of ghosts at the Eiffel Tower. But the real threat comes from a young Parisian poltergeist who causes all sorts of trouble. And what will Cass do with her power to cross the Veil now that she knows what her true purpose is?

The old queen and her raggedy witches have fled Witches Borough, and Mup’s family has moved into the cold, newly empty castle. But the queen’s legacy lingers in the fear and mistrust of her former subjects and in the memories that live in the castle’s very walls. While Mup’s mam tries to restore balance to a formerly oppressed world, Mup herself tries to settle into her strange new home with her dad, Tipper, and Crow. When an enchanted snow blankets the castle, Mup’s family is cut off from the rest of the kingdom, and the painful memories of the old queen’s victims begin to take form, thanks to a ghost whose power may be too much for even Mup and Mam to handle.

LOVE SUGAR MAGIC: A SPRINKLE OF SPIRITS by Anna Meriano; cover by Mirelle Ortega
Sequel to Love Sugar Magic: A Dash of Trouble

Leonora Logroño has finally been introduced to her family’s bakery bruja magic—but that doesn’t mean everything is all sugar and spice. Her special power hasn’t shown up yet, her family still won’t let her perform her own spells, and they now act rude every time Caroline comes by to help Leo with her magic training. She knows that the family magic should be kept secret, but Caroline is her best friend, and she’s been feeling lonely ever since her mom passed away. Why should Leo have to choose between being a good bruja and a good friend?

In the midst of her confusion, Leo wakes up one morning to a startling sight: her dead grandmother, standing in her room, looking as alive as she ever was. Both Leo and her abuela realize this might mean trouble—especially once they discover that Abuela isn’t the only person in town who has been pulled back to life from the other side. Spirits are popping up all over town, causing all sorts of trouble! Is this Leo’s fault? And can she reverse the spell before it’s too late?

THE BEAST by Ally Condie and Brendan Reichs; cover by Antonio Javier Caparo
Sequel to The Darkdeep 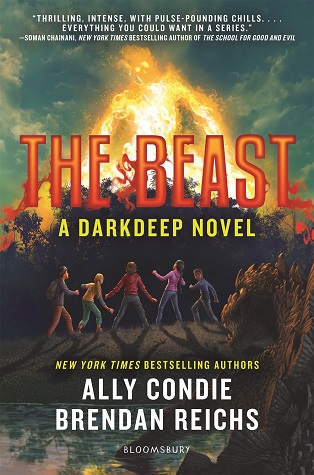 Nico, Opal, and their friends just survived their worst nightmares literally come-to-life. But when a deadlier threat surfaces, they realize they can’t control the Darkdeep, an ancient whirlpool that turns fears into reality. It’s more powerful than they could have imagined.

Left with only one option, the group must uncover the Darkdeep’s origins, as well as those of that freaky Thing in a Jar. But getting answers won’t be easy, thanks to a YouTube series intent on finding its own creature feature star. As the series closes in, everything’s at stake. Loyalties are put to the test as the friends struggle to guard their secrets, defeat their enemies, and save themselves and all they love.

On a class trip to the aquarium, certified ghost hunter Sam Wu encounters something even scarier than ghosts: Crazy Charlie, a giant shark, who TOTALLY tries to eat him. Sam has no intentions of taking any more chances with these people-eating creatures. But then his classmates Regina and Ralph announce they’re having a birthday bash…on the BEACH! Can Sam overcome his terror of becoming shark bait?

A FESTIVAL OF GHOSTS by William Alexander; cover by Kelly Murphy
Sequel to A Properly Unhaunted Place

Rosa Ramona Diaz, the ghost appeasing assistant librarian, has unleashed all the ghosts who were previously shut out of the small town of Ingot. Now ghosts are everywhere, and the town’s living residents are either learning to cope or trying to do the one thing no one can successfully do—banish the ghosts.

At school, something supernatural is stealing kids’ voices and leaving them speechless. And it’s Rosa’s job to solve the mystery and set things right. Meanwhile her best friend Jasper is dealing with what remains of the Renaissance Festival, where ghosts from Ingot’s past are now battling it out with the ghosts of the Renaissance re-enactors. And Rosa is experiencing a haunting of her own—could her father’s ghost have followed her here?

Somehow Rosa and Jasper are going to have to find a way to bring Ingot back to normal—in a world where the living are now residing side-by-side with the dearly departed.

On a school field trip to the river, Sandy wanders away from her classmates and discovers an empty turtle shell. Peeking through the dark hole, she suddenly finds herself within a magical realm. Filled with sculptures, paintings and books, the turtle’s shell is a museum of the natural world. But one painting is incomplete, and the turtle needs Sandy’s help to finish it. 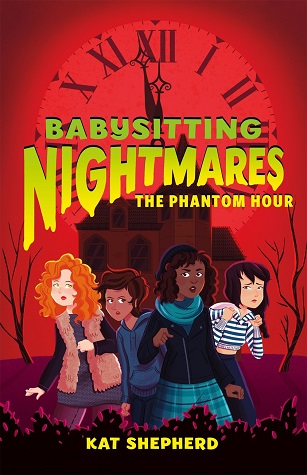 After their first brush with the supernatural, Clio and her three best friends plan to close the portal to the Nightmare Realm and return to their regular lives. But soon Clio discovers that there is a ghost haunting the Victorian mansion where she babysits…and it seems to have something to do with an old, creepy clock. Clio enlists the help of Rebecca, Tanya, and Maggie to uncover long-buried secrets about the house and the family who owned it in order to put a stop to the phantom for good.

THE IRON WILL OF GENIE LO by F. C. Yee; cover illustrations by Studio Muti, cover design by Hana Anouk Nakamura
Sequel to The Epic Crush of Genie Lo 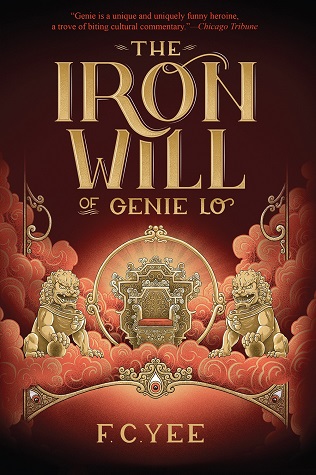 Genie Lo thought she was busy last year, juggling her academic career with protecting the Bay Area from demons. But now, as the Heaven-appointed Guardian of California, she’s responsible for the well-being of all yaoguai and spirits on Earth. Even the ones who interrupt her long-weekend visit to a prestigious college, bearing terrible news about a cosmos-threatening force of destruction in a nearby alternate dimension.

The goddess Guanyin and Genie’s boyfriend, Quentin Sun Wukong, do their best to help, but it’s really the Jade Emperor who’s supposed to handle crises of this magnitude. Unfortunately for Genie and the rest of existence, he’s gone AWOL. Fed up with the Jade Emperor’s negligence, Genie spots an opportunity to change the system for the better by undertaking a quest that spans multiple planes of reality along with an adventuring party of quarrelsome Chinese gods. But when faced with true danger, Genie and her friends realize that what will save the universe this time isn’t strength, but sacrifice.

How are you doing on your series reads? Have you read any of these titles? Tell me all about it in the comments!

© Jessica Scott and SpookyKidLit.com, 2018-2020. Unauthorized use and/or duplication of this material without express and written permission from this site’s author and/or owner is strictly prohibited. Excerpts and links may be used, provided that full and clear credit is given to Jessica Scott and SpookyKidLit.com with appropriate and specific direction to the original content.